I’ve been participating in the A&S 50 Challenge with the goal of reproducing 50 different period bead patterns. I’ve since met that goal and am now aiming for my second 50 patterns. My photography is lagging behind, but at last guess I’ve got 75+ different replicas of various period bead patterns. I run a small business selling these replicas, which pretty much pays for my glass to keep the hobby going.

10 Blue/turquoise bead with large yellow/brown eye and blue dots. Roman, Romano-British, Romano-Germanic, Irish; 4th century BC – c7th century AD. Originally produced on the Continent in 4th C BC; imported to Britain via Roman occupation. Style was reintroduced by Irish glassworkers after 500AD. Also called Garrow Tor style. (Guido 1978: 62)
11 Beads in connected segments. Anglo-Saxon, Norse, Roman; 1AD – 1000AD. Segmented beads were extremely common and have been found in many Anglo-Saxon and Norse graves. Guido type 4v (when in yellow) and Guido 6vi (in blue); Callmer type E140 (in yellow) and E060 in blue. (Guido 1999: 38-39, 52)
12 Black bead with white wave pattern. Germanic, Roman, Norse, Anglo-Saxon; 1 AD – 850 AD. These ones are based off two beads found in Leicestershire (Artifacts # LEIC-F568D3 and LEIC-690732, Portable Antiquities Scheme, UK). This pattern was imported into England from German glass production sites. Several have been found at Roman sites in England. They were probably carried along as personal items by Germanic tribesmen serving in the Roman army. (Margaret Guido 1999:23) I have an article about this bead’s story.
13 Black bead with red bars and waves. Norse, c700 – 1000 AD. This bead pattern is based on those produced at Ribe, now in Denmark.
14 Black bead with yellow & red crossing waves. Anglo-Saxon, c450 – 530 AD Pattern is called Insular Overlying Waves by Birte Brugmann. 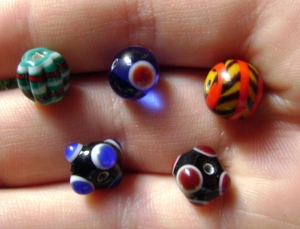 15 Melon beads in blue or green with decorative lines. Norse, c800-1000 AD. Callmer type B536. An example can be seen at the Swedish Historical Museum (artifact 454727. SHM 10335.B) from Viking era Gotland.
16 Black bead with white and blue or red dots. Norse (but probably also plausible for much of Northern Europe), c600 – 1000 AD. Johan Callmer examined many variations on this pattern in his book on Scandinavian trade beads.
17 Red bead with black and yellow herringbone. Anglo-Saxon, 500AD – 1100AD. These represent Anglo-Saxon glassworkers’ attempt to copy the more technically complex versions of this pattern seen on the Continent. One was found at Sutton Hoo. Imitation Traffic Light (Brugmann), Guido type 8xviiib. I love these beads for their sneaky attempt at industrial espionage – check out my article about this bead’s story.
18 Blue bead with white dot and red in center. Anglo-Saxon, 410 – 800 AD. This is Guido’s type 6xiii, found in Cambridgeshire, Kent, Hampshire, Norfolk and Suffolk (Guido 1999, 273 and pl. 5). Also based on artifact # LIN-300AC3 (Portable Antiquities Scheme, UK). 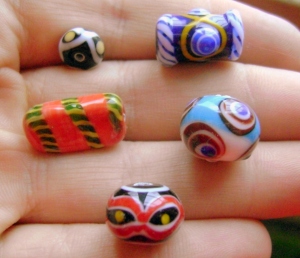 …And, the big finish:

Number 50! The most technically complex of the beads I did for the A&S 50 challenge, these are replicas of a Syrian bead at the Corning Museum of Glass (Artifact #98.1.62). The design dates between 700 and 1099AD. It features 12 slices of hand-pulled murrini cane, which I made myself with red and white stripes on a grey core. The murrini slices are then placed into a latticework of white stringer trails and each crossing point marked with a dot of yellow. They take forever to make.

So, that concludes my A&S 50 Challenge. I make all of these patterns for sale to historical reenactors who want to make sure even their little details are accurate, so if you’d like to acquire any of these please visit my Etsy store.  Thanks for reading this all the way through!